I spent today with a new client. She’s an artist and a businesswoman with a studio-cum-office in her back bedroom.

Priority number one is to get the kitchen sink clear of dirty dishes…
…but the dishwasher’s not working properly and she can’t afford to call someone out to mend it. She’s run out of washing-up liquid and anyway she can’t wash up in the sink because there’s nowhere to put the stuff that’s heaped in it and piled up on the draining board.

Priority number two is to get some laundry done…
…but she’s got nowhere outside to dry laundry, there’s no room inside for her to set up a drying rack, the tumble drier lives in a cupboard that’s so full of clothes she can’t get to it, and there’s nowhere to move the clothes to.

Priority number three is to clear a pathway to her bed so she doesn’t have to climb over clutter to get to it…
…but the stuff that’s blocking the doorway belongs in other rooms in the house (including her office) and she can’t get into them to put the stuff away.

The first time we met, she told me,

“I know I should tidy up but it never seems to be my top priority. There’s always other stuff to do”.

We can all relate to that, can’t we?, I bet, like me, you’re a busy woman. You run your own business. If you’re just starting out, you might even be in employment at the same time. Perhaps you’ve got a family. You probably keep fit and cook healthy meals. Plus you’ve no doubt got an active social life. With all that stuff to do, it can seem like it’s impossible to get round to decluttering and organising.

It’s not though. It’s a question of priorities.

We all prioritise all the time. Even when we don’t think we do. Often we think we’re doing the stuff we have to do instead of the stuff we want to do.  The truth is that we always have a choice, and we always do what we choose to do.

We don’t have to work at all. We could choose not to. Yes, there would be consequences (and that’s part of why we’re choosing to work). But we could make that choice.

Take charge and set your own priorities

I find it scary sometimes (what if the person I’m talking to doesn’t think the thing I’m going to do is a good enough reason to get off the phone with them?) but it’s also empowering. Instead of presenting myself as a victim of circumstance, I present myself as a self-directed woman who’s setting her own priorities and in charge of her own life.

And it’s honest. I realised that saying, “I’ve got to go” disempowered the person I was speaking to. It presented my decision to go as something out of their control. When I say “I want to go”, it does at least give them an opening to request me to rearrange my priorities.

Back to my client. She’s had decluttering and organising so low on her list of priorities for so long, that she’s reached the point where her home and office are no longer functional. Thankfully she’s now putting decluttering and organising at priority number one. We’re working together daily for the next week, and weekly from then on, until her home and office are clear, and she can start working (and living!) again.

As we clear each room, I’ll help her work out how she wants to prioritise decluttering and organising in the future. I’ll help her prioritise it appropriately so that neither decluttering nor clutter ever take over her life again. We’ll get her to the point where she can work again, and live a full life, with a home-office and home that, without her even noticing it, supports her to live her life to the max.

I declutter and organise my own home, including my home-office, on a rotating schedule. I do an area every month, as a result of which each area gets decluttered about once every three years. Some areas of my home-office need extra attention though. When I reach the point where I can’t put any more papers on my desk without covering others up, I know it’s time to bump tidying my desk up my list of priorities. Even if I’ve got other urgent work to do, I’ll take half an hour to clear it.
I look on the time as an investment because it makes me more productive. When I’ve decluttered and reorganised my home-office I can find whatever I need straight away, I’ve got space in which to work, my mind’s clearer and I’m not frustrated. No matter how good your working systems are, clutter will build up, so the longer decluttering and organising your office (or home) stays too low on your list of priorities for you to get round to it at all, the less productive you’ll be.

To maximise your productivity, notice when clutter starts affecting your ability to work effectively and, as soon as it does, find time to declutter and reorganise your office. You might even find it works to schedule a regular decluttering and organising slot in your work diary.

I’m not suggesting that, for it’s own sake, you put decluttering and organising before income generation, looking after your family, taking care of your health, having fun etc. But, if clutter is starting to get in the way of that stuff, why wouldn’t you invest time in clearing it? 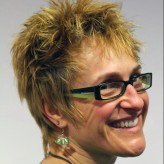 Rachel Papworth runs Green and Tidy. She helps people with way too much stuff declutter and create homes they love – homes that support them to live the lives of their dreams. A trained coach with a Psychology degree, and a self-confessed decluttering and organising geek, Rachel loves the way decluttering your stuff declutters your mind, and the contribution decluttering and organising makes to living a low impact life. For more tips on having a home that supports the life you want, subscribe to her blog at http://www.mygreenandtidylife.co.uk, follow her on Twitter @greenandtidy and Like http://www.facebook.com/GreenAndTidy.

Begin with you and improve your self-esteem

Keep your social media working for you while you’re away

5 things to do when you wake up

How to make your home-office really work for you!

3 Keys to achieving massive success in your home business!

Begin with you and improve your self-esteem

A Simple Strategy for Simplifying