When I met Simon Woodroffe, I wasn’t sure what to expect, but what I discovered was that the man who was the brains, brawn and genius behind YO! Sushi has life pretty sussed. He seems to have found the magic formula for success, and it’s not what you might expect.

He has not had an easy life and would freely admit that in his early years that he did not always made the best choices for himself; but there came a point, after turning 40 where he decided that enough was enough and that if didn’t do something now, he was never going to. So he cashed in his existing assets and took 2 years out of his life to plan, create, and build the company that was to make his name and fortune. YO! Sushi.

This decision, a risky one at the time, has clearly transformed his life.

In his own words Simon has always been a bit of a maverick. He was not afraid to try new things from his first stage job, to creating his own staging business to founding the most successful sushi chain the in the UK. When he was 16 years old he had no idea what he wanted to do. So he went to the shops, and bought 3 magazines; a motoracing magazine, Farmers weekly and Stage and Television Today. At the back of that magazine, he saw an ad for a stage manager for a theatre company in London and decided to apply for the job. Surprisingly he got that job – and discovered he had found his place. For two weeks he was immersed in the world of theatre and it was a revelation to him. During this time he was constantly learning and that experience gave him a huge boost. All of a sudden he was someone who had a job in the theatre. He wasn’t earning a lot (the grand sum of 50p per day), but he gained more than money from that experience. He gained his self-esteem.

Simon’s wisdom: The thing is to do anything. Anything. To step out of a situation you have to do anything. Taking that step may be painful. Or fill you with fear. But the trick is you’ve got to do anything consistently, with discipline and stop thinking about it.

My take on this: We can spend lots of time thinking about things and not getting anywhere. The world rewards action, both personally and professionally. Often the first step is the hardest, but success breeds success and if you take that step, a whole world of opportunities will make themselves available to you.

The secret to Simon’s Success with YO! Sushi

Simon was not the first person to open a Sushi in the UK. But he was the first to create a popular, accessible, scalable sushi restaurant. Yo Sushi took Britain by storm and is now one of the most recognisable restaurant brands in the UK. So what was the secret behind his success?

With no experience within the restaurant industry, or sushi making for that matter, Simon credits the success of YO! Sushi to his flair for the dramatic and his background in show business. Simon didn’t create a restaurant, he created an experience. And he LOVED sushi. When he saw the conveyor belt concept from Japan he had a lightbulb moment as it really appealed to his stage designer in him. He thought of the whole thing as a show in terms of the design, the branding , the execution and the publicity. And it was that idea of creating an entertaining dining experience that made YO! Sushi work. Without showmanship, it is unlikely that YO! Sushi would have survived.

Simon recognises his own contribution but does not by any means take all the credit for YO! Sushi’s success. Simon built the first four restaurants, but then brought Robin Rowland on board to grow the company and take if forward, and Simon believes that without Robin, YO! Sushi would have never survived.

My take on this: Creating the right team around you is critical to your business success. By focusing on your strengths and allowing others to use theirs you can achieve much more than you would be able to on your own. In this case Simon’s strengths were the brand, the creativity and the razzmatazz. Robin’s strengths were the operations and creating a scalable model.

It’s all about Awareness

Simon starts his day by writing in a journal followed by a 15 minute session with his coach. This gives him knowledge and some insight into his world and himself . Simon is a big advocate of having a coach and using one prepares him to face every-day from a position of knowledge about what he does and doesn’t know.

My take on this: Journaling is one of the easiest and most powerful ways to accelerate your personal development. By getting your thoughts out of your head and putting them down in writing, you gain insights you’d otherwise never see. Click here if you want to find out more about journaling.

The challenges when starting up

The most difficult thing when launching YO! Sushi was that it took 2 years to put it together. In those early stages of creating his company, Simon found that everything was difficult. He faced many challenges during the pre-startup phase particularly raising the money and losing his first choice of location. There was one point where he lost the site he had chosen, lost the money he was hoping for and almost lost everything. They were very lean years for Simon – working from home, no taxis, no holidays, no eating out. Thought it all however he kept going and kept completely focused on seeing his vision through.

Simon’s wisdom: If you are struggling, there are a number of stages to crawling out of the hole…

On the current economy

Simon’s advice on what to do in the current climate is very simple; do whatever it takes to stay in business – cut costs, cut prices – do whatever it takes. You have to stay on top of your business, keep on marketing, keep on spending money on staff, just make sure you’re damn good at what you do. Carry on doing what you’re doing very very well. Word of mouth marketing is far better than anything else.

Last year, Simon sold his remaining stake in YO! Sushi, but ever the savvy businessman he kept a stake in the business. He now receives a 1% share of global sales and has retained the rights to the YO! brand which he can apply to all his future ventures. This has allowed to him stay connected without having to be directly involved in the business. In fact, he now recognises that he is best in creating the businesses and then finding people who can deliver them. His current ventures are Yotel which is achieving success in the UK and in Amsterdam, YO! Home which is a new home concept that he is developing and YO! Zone which is a spa concept.

The one thing I really enjoyed during my conversation with Simon, is that he has very little ego attached to his success. His priorities lay very firmly with his friends and family. He’s finding a way of living his life that works for him and has meaning and is evaluating all  of his decisions based on his values and priorities.

Simon was very open about his life experiences and the impact that they have had on him. He spent 8 weeks in prison for doing drugs when he was 17. And this one experience had such a profound impact on him that he had nightmares for years about it. As a result he is now very interested in prison reform and the impact of prison on society and the prisoners themselves.

There has been some speculation in the press that he runs the risk of being a one hit wonder, and in one article I read, the journalist expressed that he had been ‘lucky’ with YO! Sushi. However, my experience is that when starting a business, luck doesn’t factor very much into it. Hard work, commitment, dedication, persistence, belief, balls (we really need a female equivalent), brains and a good team are what I think contributed to Simon’s success – luck is not the reason that YO! Sushi succeeded.

Simon Woodroffe is a complex man, who has lived a tumultuous life. There have been times when he has found his life and his future wanting. But rather than wallowing, he decided to do something. He stopped what wasn’t working for him and risked everything. As a result he succeeded in creating a business that is vibrant, dynamic, successful, and different. In 12 years Simon Woodroffe has gone from contemplating the failures in his life to discovering what success means for him and now is playing on his own terms. 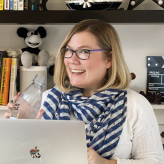 The real secret to getting sh*t done

Sticks & Stones: How to reduce the impact of negative people

So ladies, does size really matter in business?