We all know it costs more money to win a new customer than retain an existing one.  So why has the act of thanking our valued customers and contacts for their support and custom become so elusive?

My young daughter received a card from Cancer Research UK recently.  We’d run its Race for Life back in June and were really proud that we had both completed the course and managed to raise sponsorship money for this worthwhile cause.

The card was very impressive and tailored to youngsters.  It was personalised with my daughter’s name and gave little messages of thanks from Cancer Research within it.  These included thanks from the scientists working on finding cancer cures, thanks from cancer patients, thanks from the race organisers and even fellow participants.  It was such a simple device but really impressed us and I think will encourage my daughter to consider supporting this fundraiser next year, as opposed to another.

Be polite and create goodwill

This then got me thinking about the act of saying thank you and how less obvious it is in business.  Yet with the economic struggles we all need the goodwill and support of our customers and valued contacts.  How often are we thanking them though for their repeat custom, their referrals and recommendations?

These thoughts further developed in my mind when I was asked to write a number of recommendations for some valued contacts.  I did so happily as I rate their work, but it has been a bit disappointing that even several weeks later I still haven’t heard a word from them. I wasn’t asking for a reward but a quick email or text acknowledging this effort would have been polite.

Stand out from the ‘silent’ crowd

We all accept that nowadays people and businesses are very, very busy which is why investing time to say thanks carries that much more weight.  When you make this effort it certainly raises you in people’s estimations and over time it can help clinch the decision as to whether they should support your business or someone else’s.

Fear of saying thank you

The recently introduced Bribery Act has put off a lot of companies from making thank you gestures. There is so much confusion about the Act and people fear being accused of bribery by giving a gift or token of their appreciation.  In fact one of the theories as to why seats were empty during early Olympic events is that corporates became nervous about offering/accepting this corporate hospitality because of the Act’s introduction.

When you look closer at the Bribery Act it doesn’t stop you saying thank you per se, it just depends what that thank you is for and what you are hoping to achieve by it.  For example under the Act a person is guilty of the offence of “bribing another person” if they offer, promise or give (whether directly or indirectly) a financial or other advantage to another person with the intention to induce that person to perform improperly (or reward them for the improper performance of) a relevant function or activity.

The Bribery Act guidelines suggest that gifts, hospitality invites or other similar actions are generally acceptable if a company can show that:

He adds, “Giving and receiving gifts within the ordinary course of business will generally be accepted as long as those gifts do not lead to a sense of obligation or encourage the recipient to perform improperly. The main thing is to put proper policies and procedures in place to prevent bribery/corruption in your business and train all your people on those.  Also introduce a procedure for recording all gifts both given and received by your company. If in doubt seek advice from your accountant or lawyer.”

Marketing to your existing clients

A message of thanks can make your marketing to existing customers really stand out.  Instead of repeatedly sending generalised communications which try to flog more of your services or products (like most of their suppliers do), why not opt for more personalised touches which include thanking them for their custom.  There are many simple ways you can use thank you in your marketing and sales efforts:

The recession and the Bribery Act have meant people may be uncomfortable accepting lavish thank you tokens. But at the same time businesses need to show they appreciate their valued customers’ and contacts’ support.  The trick is to find the right balance and not avoid saying thank you altogether. The more you know about that customer, the more you can select the right mode of thanks.  It certainly shouldn’t be lavish –  a handwritten note can sometimes be enough to show you really value their support of your business.

‘Tis the season to be jolly’

I’ve said this before in my articles for Women Unlimited but I’ll say it again.  I don’t have anything against businesses donating to charities, but I question whether the ’round robin’  e-shot at Christmas telling customers and contacts of this really does much to secure goodwill and loyalty in the year ahead?  Taking time to write a personalised charity Christmas card will show 110% that you really value their business.  Think how many emails are currently swamping inboxes. Do you really want your one thank you attempt buried amongst them?

Is it worth the effort?

Only you can really answer this but consider the value of your customers and calculate the cost it involves to win new ones.  Isn’t it better to invest some of that effort to thank and protect the customer base you already have?  Remember a happy customer has the potential to recommend you to others.  People are canvassing opinion in their purchasing approach and keen to get recommendations from friends, colleagues and contacts before committing to one supplier.  We’d say it is worth the effort to say a simple thank you from time to time.

Let’s put the Bribery Act into perspective.  Of course people shouldn’t be bribing anyone. But don’t use confusion about the Act as an excuse not to send a simple message of ‘thanks’ from time to time to your customers and contacts’ – acknowledging their support. With the economic outlook still looking turbulent we need all the support we can get. 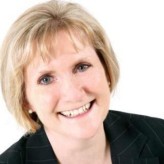 An experienced and effective business development and marketing strategist, Michelle has built a successful career increasing top line growth for service businesses and organisations. She helps her clients turn their marketing, business development and thought leadership plans into reality with her ‘hands on’ support and practical advice. A prolific writer, Michelle also combines creative flair with business nous to produce highly effective results. She has written (and ghostwritten) for many professional and business publications and is a member of the Chartered Institute of Marketing and professional services marketing group. Extended Thinking is a hands-on marketing and business development consultancy. Bringing together great minds and great ‘doers’, we help our clients devise and implement plans that achieve real business growth. Our clients come from a wide variety of backgrounds and sectors, but invariably are those who are too busy or lack the resources to action their marketing and business development plans. We roll our sleeves up and muck in to free them up to do what they really want to do and are good at doing.

Making your blog a business with Joanna Penn

Why Networking Is Your Most Powerful Business Tool - Part One

Make it easy for your customers to find you

What are you doing right in your marketing?

5 Ways to Exceed Your Customers’ Expectations

… with every Christmas card I write…